How Often Do You Finish Games? 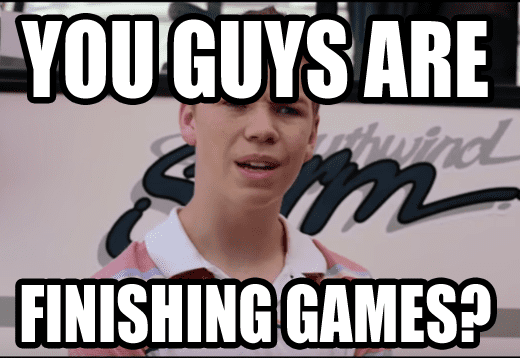 I'm pretty shit at getting through games nowadays. I tend to lose interest quick or go through phases of what I feel like playing.

That said, every once in awhile I come across a fantastic game that I just can't put down until I finish it. A few games in recent memory that fit that category:

Believe it or not I make an effort to finish any game I start and only that game until I see the end credits. I am probably in the minority as, judging from the weekly "what games are you playing" post, I always see folks list a multitude of games they're playing simultaneously. The only exception to this are shmup's as I need to "mix things up" whenever I find myself stuck at a particular boss or area.

If I stop playing the game it's usually because I am either bored or not having fun. That is the point when I'll usually sell or swap the game and it remains unfinished.
Reactions: RiffRaff

What kind of rookie shit is this? No one finishes games. That's absurd.
Reactions: Hakkurei, LaserPirate and Slimybearreturnsv866.5

PhilKenSebben said:
What kind of rookie shit is this? No one finishes games. That's absurd.
Click to expand...

Rookie shit?! I'm such a gamer I don't even play games!
Reactions: Hakkurei and LaserPirate

RiffRaff said:
Rookie shit?! I'm such a gamer I don't even play games!
Click to expand...

✨ Matt ✨ said:
I give up like multiples more games than I beat, lol. I usually just play games until another one grabs me and then cycle them in and out until I eventually beat one. Keeps things varied, too!
Click to expand...

I'm very stop and startey with games even if I love a longer game I tend to get busy with stuff I have to do then can't get a chance to get back to finishing it until a few months later. Have noticed this gen I am much quicker to just give up on games if I'm not enjoying them or not try to finish them. Just gave up on the new God Of War a few hours in when I couldn't stand playing it any longer same for Horizon Zero Dawn.

Those long 100 hour games always catch me up always tend to be 25% at the very least slower to complete them then everybody else says it takes for them to finish the game.

As often as I can
Reactions: Hakkurei and RiffRaff

I hardly ever finish games, my attention span is so small it could... what were we talking about? Oh look, a cookie!
Reactions: RiffRaff and Hakkurei

Give it 2~3 hours in, if by then I'm not feeling it, I'll probably not gonna finish it unless I have hope it gets better.

But then again you're talking to someone who beat Family Guy something something Multiverse because he was bored, don't take my word for it. Sometimes you just want to see that trainwreck in person. And I've been pretty vocal about how much I dislike a LOT of things about Xenoblade 2, still somehow was able to finish it AND get all the non new game + gacha BLADEs, even though I was pretty much feeling off about the whole thing more often than not, it was Xenoblade, I paid full price, I had to see it through.

So, money spent is actually a very good motivator, somehow I've beaten every 3DS physical retail game I've bought besides Mario Kart 7, and that's counting Paper Mario Sticker Star! AND THAT GAME... Is certainly something I've been warned about. But hey sometimes you got to press on if you ever intend to finish a game, you'll be at least able to say "Yes, I can talk about that one, I've played it to the end, dammit!", and it was like 50% off, surely it couldn't be thaaat bad, right?... Hahaha, ha. (If you have a 3DS, the best Mario RPGs are probably the remakes for Bowser's Inside Story/Superstar Saga, just, just go get those instead, please)

I don't finish a lot of games these days. I think it's because I enjoy returning to my favorite games over getting into new ones. Like, yeah I could play Persona 5 which is entertaining and engaging and I do want to see where it goes. But what do I do? Boot up an old fave instead because I usually want to let my brain rest and that's easier to do with something I know the ins and outs of already. I don't need to pay attention to the story, or learn new gameplay mechanics. It's just so much more relaxing to run through the first chunk of a game I know and love rather than focus up and learn to love a new game.

On rare occasions a game will come along and really suck me in, such as Blasphemous. Even rarer are the games that compel me to continue playing despite being horribly flawed, like FF7R.

I used to have this problem where I wouldn't want to start new games until I finished the one I already started, but when I stopped wanting to play the game that was keeping me from playing something new it became a problem. So now I hope between games a lot. I let my desires guide my choices when it comes to what I want to play. Maybe I'm into old school FPS games one month, and then I'll get into an MMO for the next, or go on a JRPG kick. Who knows? Certainly not me.
Reactions: Roager, Hakkurei and RiffRaff

I play them for as long as they entertain me and no longer. I'm not one of those people who feels a lack of accomplishment if I don't finish a game.

That being said I rarely finish games completely. I find very few game are worth completing as most show all their cards by halfway through the game and introduce nothing new from then on. There has to be something compelling to counteract that, like an excellent story (Metal Gear Solid, Chrono Trigger, etc.), elements that create high replayability (Way of the Samurai, visual novels with multiple routes like the Zero Escape series, etc.) or something to that effect.
Last edited: May 29, 2020
Reactions: Hakkurei and RiffRaff

I probably only finish one in 10 games I start. I'm more interested in tasting games than I am in gorging on them.

NSPillow said:
I probably only finish one in 10 games I start. I'm more interested in tasting games than I am in gorging on them.
Click to expand...

I get stressed if I think I’m near the end of a game, I’m not because I’m only 40 hours in, and will stop playing and switch to something else. It is nice because all of the unresolved threads get muddled up in my head cannon.

I'm a bit of a trophy/achievement chaser so I'll definitely try to finish a game unless I really dislike it. Last gen i was a single format gamer which made concentrating on one or two games at a time more manageable, owning an Xbox and PS4 this time around means I'm spreading myself thinner.
Reactions: RiffRaff

Less often than I used to. There was a time when I would keep going to see a game like The Evil Within to the end, but now I don't have the time to spend carrying on with a game I'm just not enjoying.
Reactions: RiffRaff