Oh it has been a MOMENT since I was part of a forum for real. Gosh, I gotta set up a sig!

Well, anyway, I'm gonna post some classical music from (mostly) baroque composers in this thread and probably add some notes to them. Nothing profound, I'm not musically educated AT ALL. But just my personal thoughts.

First one is one I've posted a couple times back on Qtoid. It's RV390 from Vivaldi (who I've been enjoying a lot lately). It's a fun, active piece that waffles between contemplative, waltz-like and some unstructured thing in between. That's kinda what I've read Baroque music was about.

I was introduced to this piece back in middle school when I played clarinet. I like it, it's got a lot of variation in melody, instrumentation, and tempo.

Today's post is something from a composer I hadn't heard of until I listened to his work.

Alan Hovhaness, an Armenian-American composer who's work is probably not fit for a "classical" thread, but I did warn everyone I have no musical education! So fuck it! It's definitely in the right department, if you like Classical you'll enjoy most of his work. Well, I do. His stuff is very grand, it's very uh... glaxian in scale, if that makes any sense. You'll get what I mean when you listen.

I love this interpretation of Debussy. Arrau really brings an emotion to the piece unlike i've ever seen, it has a nice tempo, he's not in a hurry, perfect to savor every note... it really feels like an story, a story the genius Debussy brought with only his music. I love it.

Ah, now we're playing with power! BWV 543 is a real colon-blow of a performance and proves once again that while many come close, Bach stands above them all.

I love you people and I love Vivaldi. Great piece.

I've mentioned before in my intro, but I used to play in some symphonies until I moved out of college. (Damn do I miss it.) Of all the Symphonies I've played, I think Mahler Symphony 6 was the most fun to play.

It's just this epic work and the intro alone was a moment for the bass section. The intro of this symphony actually got used a couple of times in the anime Legend of the Galactic Heroes too.

Fun fact about this piece is that there is a call for a hammer to be used as a percussion instrument. But not just any hammer, a large one like Mario in Donkey Kong. It's used to strike padding to create a loud, muffled, THUD. I think my University almost or actually had a world record with the size of our hammer. I wish they checked. Will have to find a picture to share.


And for a sense of something that I used to be able to play on bass (it would take me awhile to relearn it after 4-5 years), this piece was originally for violin to be played only on the lowest string, but you can play it on bass by only using the highest string. I really struggled with the bowing on the last movement, it was like a stringed instrument version of a tongue twister, but it was really fun to learn. Especially the super high harmonics, which the person in this recording played differently.

I played them as false harmonics. You bassically use your thumb as an anchor to "shorten" the string and stretch your middle or ring finger to hit the false harmonics that you create by shortening the string. It's very difficult on pretty much any instrument, but particularly on the bass. It's like walking a tightrope, which is probably why it's played differently in the recording.

(If you're not sure what harmonics in general are, they're higher notes you can play by only lightly touching the string and not completely pressing it. Natural harmonics are almost all over a string. False ones require you to "shorten" the string beforehand. And this is probably the worst explanation of harmonics ever...sorry.) 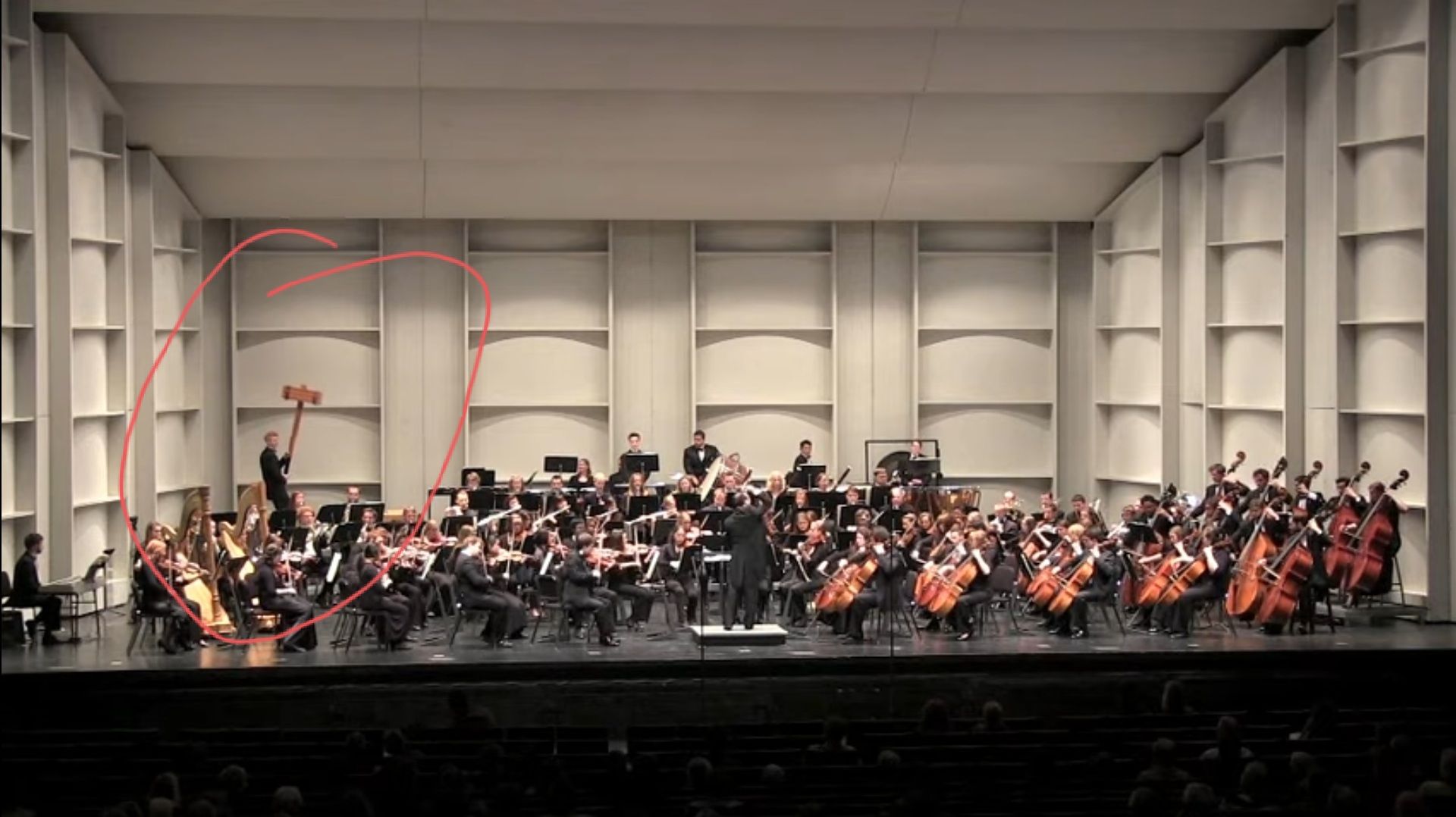 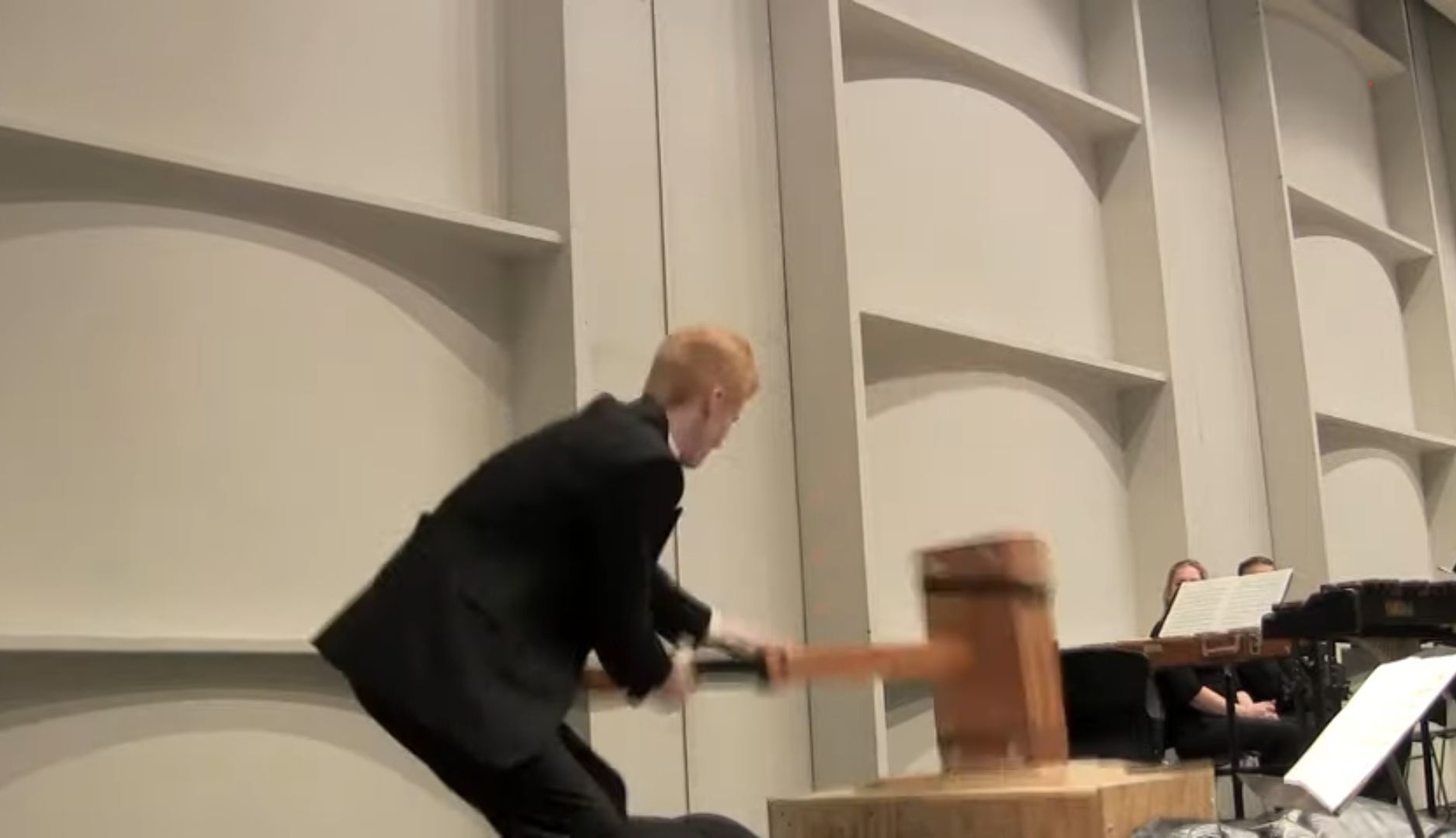 Was able to screenshot the Mahler 6 hammer we used. It's absurd and I love it
Reactions: RiffRaff and Dr. Mel

That is amazing. Thanks for sharing the pic!
Reactions: Turbokill

Posted that on my phone and wow, those dimensions are terrible.

Next up, let's listen to some Royer. And particularly to the extremely emotive performance of Marco Mencoboni on my favorite instrument to listen to: the harpsichord.

I've listened to a few different performances of Le Vertigo and Mencoboni is the only one to really nail that explosive section at 2:06 and others.

Let's continue with the harpsichord and Alessandro Scarlatti and a piece that sounds terrifyingly difficult to actually play.

Love/Hate relationship with Scarlatti. Once upon a time, when I was in high school, an audition requirement for counties was to play a bass arrangement of a Scarlatti sonata. At least it wasn't yet another Bach Cello arrangement..

There's so much great repertoire that deserves more attention and is originally for bass... But they choose Scarlatti.

I'm gonna ruin this thread with a clever little fugue I saw while browsing YouTube. I seriously wish it was played with harpsichord, as I also love harpsichord, the most metal of baroque/classical period instruments. (See: Black Diamond by Stratovarius)